As we started this year with the finalization of our next major release, the Survival overhaul, we kicked off the public tests with our community. You can see my blog post about it here: Public Tests for the Major Overhaul of Survival. The first public test ran on 17th of January, 2019 and today, I’d like to reflect back on this first test.

We have received over 1000 responses from you, our players during this first test. Taking into consideration that the test ran only for 24 hours, it’s great to see this high number. Our team has reviewed your feedback and made several important changes. Let me focus on the changes we introduced based upon the feedback we received during the first public test. These changes are already implemented in the new build, which is going to be available for tomorrow’s public test.


The second test is planned to start tomorrow, January 31st, 2019 at 10am (UTC). We are extending the testing window until Monday, February 4th, 10am (UTC), so you’ll have plenty of time to enjoy the new build and give us your feedback. 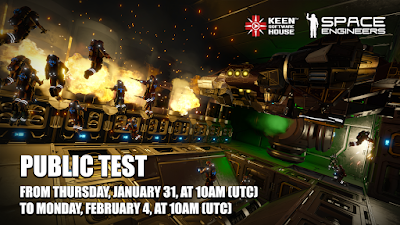 The main reason for running the public tests is the feedback we’d like to get. It’s crucial for us to know if the changes we made are good and if you see them as improvements. You can provide us with feedback through an in-game survey that will be available at the end of the tests. You can also provide us with any additional suggestions you may have here:
https://support.keenswh.com/spaceengineers/publictest