Answers to your questions #1

Answers to Space Engineers related questions posted on our Facebook page and our forum.


Steam Early Access date will be announced during the first week of October 2013.


How does building work?


We have two building modes: creative and manual

We already implemented both modes. The creative mode is 100% functional and will be available on day one. The manual mode is 99% finished but we still haven’t tested it as much as we need to and most probably it will be disabled during the first few weeks of Early Access (otherwise people would try to use it, get into confusing situations, get upset, etc.)

How do you create an object?

Prior to Early Access launch, we plan to publish a list of features, split into three categories:


We will release a walk-through video, showing the state of Space Engineers on day one of Early Access. People who are willing to purchase the game will see what they are getting.

At this moment, the core of the game lies in the creative mode building, physics simulation and destruction. These are the features that must work on day one. Everything else can wait.


Please keep posting questions and suggestions to our FB page at https://www.facebook.com/SpaceEngineers or our forum at http://forums.keenswh.com

We can’t reply to every comment, but I can assure you that we read all of them and they will influence how Space Engineers develops.

Warning: Space Engineers is still in development. Everything in the game is subject to change.
Posted by Marek Rosa at 10:36 AM 25 comments:

In this blog-post I will describe the solutions we considered and tried in Space Engineers regarding artificial gravity, I will reveal the one we finally chose and explain how close to realism it is.

Warning: Space Engineers is still in development. Everything in the game is subject to change.


Why do we need gravity in Space Engineers?

A game with no gravity (player moves only by jetpack) offers limited experience. Furthermore, the construction constraints that are imposed on players building space stations in a gravity-enabled environment are vastly different from a situation where gravity isn’t possible.


These are the scientifically correct methods for producing artificial gravity. Unfortunately, none is suitable for our game.

Solutions we tried and discarded

We had to accept the fact that there are no feasible solutions for producing artificial gravity. Therefore, the direction we followed is shaped by the requirement of intuitive game-play and not by our drive for realism.

Gravity generators are modules that consume energy and produce unidirectional gravitational force – a vector that’s parallel to the generator’s main axis. Let’s put it this way – a gravity generator installed on a platform will pull down all objects above and below this platform. 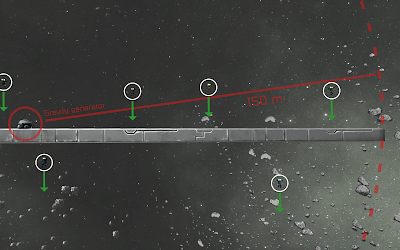 The purpose of this screenshot is to show how gravity generators aggregate their force. There are five gravity generators; green lines demonstrate the direction of pull/fall. Notice the gravity indicator in the right-bottom corner: grey lines show all gravity vectors and the white line shows the final aggregated gravity. 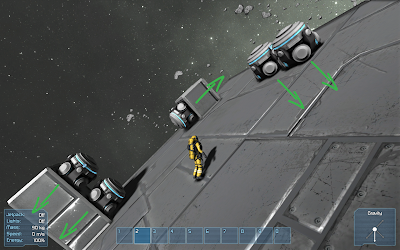 The HUD indicator tells you that there’s no gravity source near you. 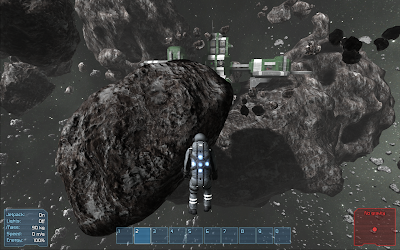 Gravity doesn’t affect asteroids, small and large ships, static objects and astronauts who have jetpacks on.

We plan to reevaluate this model and enable gravity on more types of objects. Right now we have to stick with this. Also, in the future we should redo how gravity influences character animation (running and jumping in high gravity environment, running in multi-gravity environment with vectors changing each step, climbing on a ladder heads-down, etc.)

Since our implementation of gravity is not natural (we are breaking the laws of physics here), some obscure situations have emerged and we have to solve them carefully before we enable gravity on every type of object:


It’s interesting that our universe is configured precisely the way it is. One slight deviation to the algorithms and constants that regulate it and things don’t work anymore.

Trying to replicate the reality – when developing a sandbox game – proved to be useful. No need to reinvent the wheel; nature already did its job.

Warning: Space Engineers is still in development. Everything in the game is subject to change.

I am going to describe the decisions that led to this project and some details from its development.

I could say that the idea of Space Engineers emerged as a logical extension to what we started in Miner Wars - but it’s actually much older. Ten years ago, I wanted to make a game that would be like a computer version of “LEGO TECHNIC” (volumetric objects made of modules interconnected in a grid, with real physical properties and interactions).

Miner Wars 2081 was our first shot and it only touched this idea. Space Engineers is our second attempt and I believe we are going in the right direction.

After finishing Miner Wars 2081, we could have proceeded with a sequel or an MMO, but we felt that first we need to focus on construction and sandbox mechanics, integrate them into our VRAGE engine, build a game that represents them in a best possible way - “Space Engineers” and then reuse them in our future games: a sequel to Miner Wars 2081, an MMO or something else.

In Space Engineers, every object is made of block-modules interconnected in a grid. Every module is a real entity with volume. Depending on the purpose of a module, it can have storage capacity, electricity consumption or production, etc. If you want your lights to operate, better connect them to a grid so they can receive power from a nuclear reactor, which needs uranium to keep running. If you interrupt the grid, the power is lost. If you overload the grid, some consumers get shut down.

Space Engineers is inspired by reality and is played in an environment that can be completely altered by the player. No fake buildings with empty interiors. No fake doors leading to nowhere. No lights, computers or thrusters receiving power from some abstract source. No inventory located “somewhere” in the ship. Everything in the game has some use. There are no "decorative" assets.

Design and development of Space Engineers is guided by our pursuit for realism. Every design decision is shaped by questions such as “how would this thing work in real life?”, “is this technology feasible in the 21st century by extrapolating our current knowledge?”, “what would NASA do?” etc. Not making design-shortcuts proved to be useful and I can say that “the reality is the best designer”.

The foundation of this new technology is a modular grid with real-time deformation and destruction physics. The development of breaking physics took us about a month of work, but it was worth it. It would feel weird if you could build a mother ship, crash it into an asteroid and have it just bounce away. Now it will deform blocks in collision and if damage reaches a certain point, destroy them completely. The video above shows how this works.

On a side note, the modular system is an interesting idea for real space stations and space ships and perhaps if future space engineers have enough resources and 3D printers, they will use it :-)

Another significant difference to Miner Wars and our original plans is that we added character animations. The player is no longer “a ship”. This change adds new gameplay possibilities.

The art style of Space Engineers isn’t finished yet (many models are still just placeholders), but I am already satisfied with the way it’s going - simple colors, low frequency textures with little noise and clutter, current-era look and no flashy, “too sci-fi” surfaces. The “stripe pattern” design that we use when constructing ships was an idea that emerged from the block-nature of how ship construction works and also by the “tourist signs” we have in forests here, in Czech Republic. I am not yet satisfied with how boxy the small ships appear; we may redesign that in a future iteration.

We started working on Space Engineers in April 2013, right after we finished with our post-release works on Miner Wars 2081. I am writing these lines in August 2013 – so that’s 5 months of development. Not including me and a few other people, the major portion of Space Engineers alpha was carried out by 3 programmers and 1 artist. No overtimes and no crunch periods. I am amazed by what my colleagues achieved and I’m very proud of them.

If you want to see some actual game-play, watch these three unofficial teasers that we released in August):


Thanks for reading this!

Warning: Space Engineers is still in development. Everything in the game is subject to change.
Posted by Marek Rosa at 9:54 AM 35 comments: