GoodAI is heading to the AGI-15 conference in Berlin!

GoodAI is gearing up for our first whole-team conference about general artificial intelligence in Berlin, Germany from July 22-25. We’re sending a full bus of team members, about 25 people, to represent GoodAI.


AGI-15 is organized by the Artificial General Intelligence Society together with the Association for the Advancement of Artificial Intelligence (AAAI). The conference is a yearly gathering of top researchers, academics, and business leaders dedicated to creating general AI.

When I say general artificial intelligence, I’m referring to a technology that’s very different from typical AI applications that most people have heard about – self-driving cars, chess-playing AI, or facial recognition software. These specific applications are commonly referred to as narrow AI, which means that they are built to solve very specific problems.

General AI developers such as GoodAI, however, aim for something more universal. General artificial intelligence of the future will be able not only to perform specific tasks very well, but to function with the skill and ability of a human being. Future general AI brains will perceive stimuli in the same way that a human does – by seeing, feeling, interacting, and learning – and use this data to generate behavior, perform tasks, and respond to motivations given by human mentors. General AI will be as flexible and able to learn as a human.

Conference attendees at AGI-15 will therefore all be dedicated to this major task – developing general artificial intelligence. To support efforts from others outside our company who are aligned with our vision, I decided to officially sponsor the AGI-15 conference with a $10,000 donation.

GoodAI will also deliver a tutorial presentation at AGI-15 about our first product: Brain Simulator, our visual editor for designing artificial brain architecture that is now available to the public under and open source, non-commercial license. The tutorial title is “GoodAI Brain Simulator: Prototyping AI Architectures,” and will offer an in-depth explanation of Brain Simulator and its uses.

Thanks for reading!
Marek
:-)

---
If you want to hear more about what GoodAI is doing at the conference or in general, be sure to follow us on social media or check out our website:
Facebook: https://www.facebook.com/GoodArtificialIntelligence
Twitter: @GoodAIdev
www.GoodAI.com
Posted by Anonymous at 10:13 AM 14 comments:

Today I’ve prepared a special blog post to tell you a little more about how we do things here at GoodAI. Our way of working is all about esprit de corps, or what’s often just called “morale” in English – it’s about believing in a purpose and staying motivated to move forward towards a common goal. Esprit de corps means being a cohesive whole, refusing to surrender, having each other’s backs, and getting where we need to be.

I prefer to think of us as a group of people going after one common goal, not a corporation with a hierarchy of boss and employees. Our team works in a cooperative environment, and we are all focused on one mission: creating general artificial intelligence. I also want my colleagues to feel like co-owners of GoodAI, so I am planning to give them company shares in the near future. We operate on consensus and everything we do takes us closer to our goal.

That said, every member has a particular place in the team. We’re working towards multiple smaller milestones at any given time, which means that the group is often split into teams that tackle smaller goals. We’re also oriented towards incremental progress rather than making great leaps over longer periods of time. Instead of going after a single goal that takes us two years, we aim for 12 smaller milestones spaced two months apart. I know we achieve more this way, and hitting these incremental milestones allows us to be flexible in our approach and make real progress day by day. We are not afraid to fail, and we take a positive view of every setback we encounter on the way to reaching milestones. By failing fast, we can rethink and attack the challenge from a different angle. We want to find out what doesn’t work as quickly as possible in order to more efficiently find out what methods will succeed. 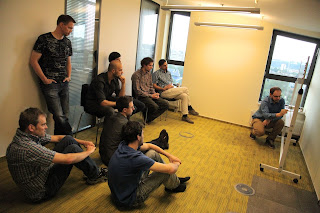 GoodAI team members are also given a lot of free time to try doing things their own way. We push hard towards a particular goal for two months, and then take one month where every team member explores their own individual ideas and interests related to general AI. We’ve found that this process allows us to keep hitting the milestones we need to hit, but also makes room for a lot of great ideas that emerge when researchers and programmers are given space to be creative.

My own role in the GoodAI team is to drive the direction of our research, push everyone to focus on the most important things and ignore what wastes our time and resources, and determine the best ways to achieve our goals. I would call myself a project architect. I keep the pressure on our teams to produce, but I’m careful to connect people and ideas and to let new approaches emerge.

My job is to understand what the teams can do and to know that they can always do better. It’s my responsibility and personal mission to teach the teams that they can do more than they ever imagined possible. My role is to tap their fullest potential.

If you’re curious about our “stay-the-course” approach, check out this article that perfectly describes the way I look at things I want to do in my life: https://en.wikipedia.org/wiki/Grit_(personality_trait)

For me, creating general AI is the greatest challenge I can imagine, and I know the risk of failure is high. But I also know that general AI will fix everything for humankind in the future – it will be a universal problem-solver. I also know myself. I’m the kind of person who needs to take on the hardest challenges that seem impossible to most people.

If something is too easy, I lose interest. If general AI was a simple challenge, I wouldn't bother. I’m all about keeping a “no limits” mentality, being open to others and their ideas, and remembering that my team is my greatest resource in getting where we need to be.

In case you’re interested in joining us :-), here’s what my team members are saying about working at GoodAI:

Honza: “I’m very curious what GoodAI will be doing in two months, or in half a year. I have a feeling that even my craziest dreams are nothing compared to what we will really do. So it will be a dream come true, literally.”

Jarda: “A big change can be made by someone new (like Marek) who wants to do things in a different way and at the right time. Also, I've always wanted to work on a team like this, and I just had to wait until the company and position was available in the Czech Republic :-) ”

Phil: “I want to be able to contribute to all of these great challenges we have. I love the cutting edge technology at GoodAI, and I love the team with lots of smart people. You can always throw an idea out there, you can always get lots of input.”

Jiri: “I’m doing what I always wanted to do – my work is my hobby.”

Today I’m thrilled to publicly announce GoodAI, a Keen Software House sister company developing general artificial intelligence. In this post, I will tell you more about our current stage of general artificial intelligence research at GoodAI, where we hope to go from here, and especially about our plans to improve our games by integrating them with our AI technology.

GoodAI began back in January 2014 as a research project within Keen Software House. Alongside becoming an independent game developer, I always dreamed of leading a team that builds truly general artificial intelligence. About a year and a half ago, I invested $10M USD into what is now our GoodAI company.

I am CEO of both GoodAI and Keen Software House. My role in GoodAI is to set and maintain our vision, driving both the research side and the business side of the company at the same time. I push the team to achieve our mission: develop general artificial intelligence, be helpful to humanity, and learn more about the universe.

I want to reach our end goal as fast as possible, because I really see the good that general artificial intelligence will bring to our world. Imagine an AI that is as smart, adaptable, and able to learn as a human being. Then imagine telling this AI to improve itself – to make itself even smarter, faster, and more capable of solving problems. Such an AI will be the last thing humans ever have to invent – once we have this technology, our AI could invent other technologies, further the sciences, cure diseases, take us further in space than we’ve ever been, and more.

By integrating Brain Simulator into Space Engineers and Medieval Engineers, players will have the option to design their own AI brains for the games and implement it, for example, as a peasant character. Players will also be able to share these brains with each other or take an AI brain designed by us and train it to do things they want it to do (work, obey its master, and so on). The game AIs will learn from the player who trains them (by receiving reward/punishment signals; or by imitating player's behavior), and will have the ability to compete with each other. The AI will be also able to learn by imitating other AIs.

This integration will make playing Space Engineers and Medieval Engineers more fun, and at the same time our AI technology will gain access to millions of new teachers and a new environment. This integration into our games will be done by GoodAI developers. We are giving AI to players, and we are bringing players to our AI researchers.

I am very happy with the overall progress of our games, and our development will not slow down when we start to integrate AI technology. Planets, new multiplayer, and Xbox porting are all progressing as planned. You can look forward to more information about these features, plus some further info about AI in games, in a future blog post.

What modders are saying about integrating Space Engineers and Medieval Engineers with Brain Simulator:

war2k: "This is really cool. I like this concept of being able to design your own AI for a game and then teaching it how to function. Very awesome work, you guys."

Shaostoul: "True AI is both an amazing and terrifying concept, but one I think is a necessity for us. I love the idea of being able to teach an AI and guide it to being productive. Better than a scripted AI for sure."

Malware: "AI is inevitable. It is only a question of time before someone cracks that code, literally. I always believed that the right way to go would be a system that can learn as we do, if that was possible. Why should we waste time figuring out what nature has already done? You're on the right track, I'm sure of it."

Thanks for reading this!
Marek