Meet the Miner Wars Team at GDC in San Francisco

We are thrilled to announce that Keen Software House, developers of Miners Wars, will be attending this year’s GDC (March 5-9, 2012, San Francisco http://www.gdconf.com). Miner Wars is a hot new 6DOF space and underground shooter with fully destructible environments. Please stop by, check out the game, and chat with us. We’ll be in the GDC Play pavilion, in the Esplanade Ballroom of Moscone Center.

Keen will be proudly presenting Miner Wars 2081 and its new arcade-style offshoot, Miner Wars 2.5D. The first 30 people who visit us will receive a free serial key for MW 2081 and its upcoming MMO version!

For current players and others following the development of Miner Wars:

We are presently making major changes to the game, so there will be no new release before the GDC. However, you may expect a new Test Build, as well as a new public demo, in the week or so following the GDC (first half of March).

We do have a cool new trailer in production, which will also be released soon after GDC.

No downloadable demo of Miner Wars 2.5D is presently available; however, a game demo can be seen at GDC. We will be releasing the game for PC/iOS/Android right after the GDC.

Hope to see you at the GDC!

Me in a video podcast at games.cz - Fight Club

Games.cz is a Czech game magazine. This Wednesday I was a guest at their video podcast.
It's 2 hours of talking about Miner Wars and other topics.

Unfortunately it's all in Czech language. 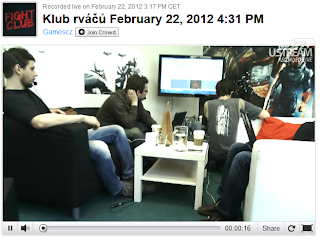 I have been a subscriber of Ikarie (now XB1) for 20 years or so... love that magazine. And now they mentioned my name it in! How cool is that!

(BTW, I don't think this article is going to be published in the printed version, but it's great anyway)

We've made it into one of our Czech TV channels again! This time it is Czech TV game show called Re-Play on TV channel Prima Cool. They made interview with me and other members of our team.

The part about Miner Wars / Keen Software House starts at 08:10. It is in Czech language only, however, you can at least get the visuals of our team in motion! ;)

Posted by Anonymous at 3:46 PM No comments:

Article about me in "Hospodarske noviny"

They made an article about me in Slovak newspaper Hospodarske Noviny (Economic News...).

The article sounds better than the reality :-) Thanks. 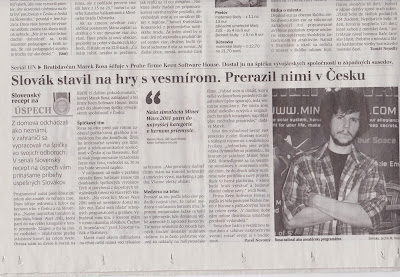 The next article will be something along the lines of "Marek killed..." :-)
Posted by Marek Rosa at 12:02 PM No comments: