What feature is going to be the KILLER feature of Miner Wars?
This post is intended to open a discussion. My mission is to find the single thing that will make Miner Wars remembered for centuries.
Our team already has some ideas, but what we need is the voice of the people.
When I started Miner Wars project I knew I need some special feature, something that other games don’t have. At that time I didn’t care about genre or type (strategy vs. FPS shooter, car driving vs. space shooter...). The only important question for me was “what's the most original game feature?”.
Then I got this idea with destructible environment, mainly inspired by old DOS game Tunneler http://www.youtube.com/watch?v=8wcdIDr4jrU I felt that destructible environment is a cool and original thing, people will want to try it – and there was no other game that could offer that in those times.
Putting the game into asteroids field, adding open space world, in-game editor, epic story, etc. were just extensions to the original concept - destructible environment.
Now we got into a point where technology of Miner Wars / VRAGE is almost done and we can focus on the game play itself. So here's the question:
To help you out, here’s a list of what I consider key features of Miner Wars:
By KILLER feature I mean: one single thing that people will talk about, philosophers will convey never-ending discussions, minstrels will sing sonatas and players will die for.
Is there any brave soul who can give me an answer or an opinion?
Thanks,
Marek
Posted by Marek Rosa at 8:31 PM 6 comments:

We were in Czech Television!

The guy in the white shirt is me... although I can't believe I look so weird :)  Camera doesn't like me.

We have just released a new Miner Wars Test Build (and granted Test access to all our customers), so feel free to try the new version and post your suggestions, ideas etc. More information as to the current release as well as comming soon features is available in the official PR in our forum:

Comments? Do you like it?
Posted by Anonymous at 11:37 PM No comments:

Lately you have been crying and demanding a new footage. Since we like spoiled kids, here is a small demonstration of our latest advancements in VRAGE rendering.

All these phrases such as SSAO and HDR are almost a standard feature in current AAA video games - but I wanted to show them, because our lead rendering programmer Petr Minarik took a special care to make them extremely beautiful!

I am a modest person so I will just say: Miner Wars is now the best looking space simulation ever :-)

Other than that: the next big milestone is to finish playable sandbox single-player story mode. Once it's done, the game will finally start to live. Sectors will get filled with asteroids, debris, space stations, rats, mosquito and pedestrians. We are not far from that, maybe 2-3 weeks.

Yeah, regarding my "personal life" - I was finally able to spend a full weekend programming. Not just doing design and architecture, but actual programming. That's very refreshing. My mirth has disappeared at Monday morning - once there are people in the office, I am interrupted at least every 5 minutes. I don't know if people want to talk with me because of my friendly personality, or they just enjoy bothering me, or mix of these two... what do you think?

New Miner Wars logo is in the production (by our genius artist Filip Novy) - you can see the first sketch in the video above.
Posted by Marek Rosa at 10:44 PM 2 comments:

This is one older video made by Ansel. It reminds me of... myself! :-)

What has happened in last two-three weeks: 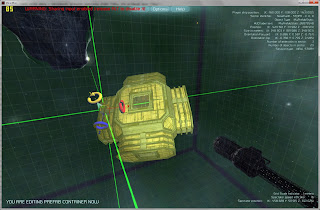