My experiments with the evolutionary dynamics of sexual selection

A few months ago I decided to start doing my own experiments on our GoodAI Badger architecture.

My initial motivation was that I really miss programming, and being able to just build stuff with my own hands. A secondary motivation is that I have an intuition about what I think our end-goal would look like, and the best way to explain it is by building prototypes.

How does my approach differ from Badger architecture? In Badger, the goal is to learn the shared expert policy through outer-loop. In my approach (which I call “Manual Badger”), there’s no outer-loop. Instead, agents/experts come pre-designed with a policy that can later evolve into something complex and interesting. This approach has similarities to evolution, except this will be quite a specific version of evolution (in some ways more limited and narrower) but at the same time is supposed to enable open-endedness and the emergence of intelligence.

*Note: the boundaries between what is outer-loop and inner-loop, or what is expert’s policy and activations, and on what time-scale the majority of adaptation happens is maybe blurry and not so relevant at this moment.

What is sexual selection? It is a mode of natural selection in which members of one biological sex choose partners of the other sex to mate with, and compete with members of the same sex for access to members of the opposite sex. What makes this interesting from the perspective of AGI and Badger is that preferences arising within the population can generate fitness and reward effects that overtake external pressures, resulting in a system that in some sense chooses its own goals.

How is this relevant to AGI and Badger architecture?

This is the 'Manual Badger' take on our Badger architecture.

The difference is that we don't learn the expert policy in the outer loop. Instead, we hard code it and let the system evolve into something interesting (diversity of behaviors, evolvability of adaptation, etc).

Memetic evolution - agents being able to spread their memes. Memes are programs/behaviors.

My expectation is that it should lead to a higher diversity of sexual selection and behavior, and to the emergence of new behavioral niches for other memes.

Hopefully, we will observe a few more evolutionary transitions - interactions that are not predictable from the initial state. 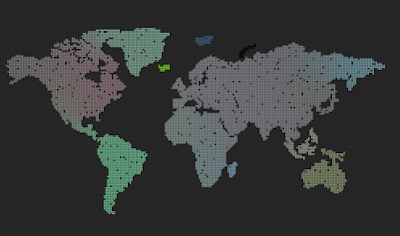 Make agents prefer mates with stronger versions of their own traits. 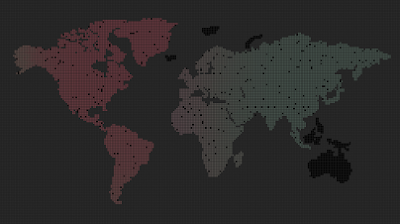 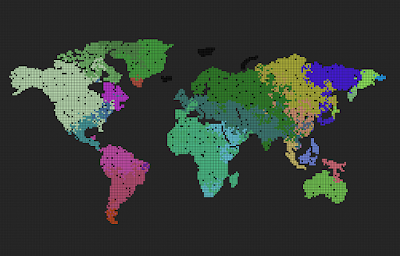 Can we see spontaneous speciation from a completely grey initial state when mutation is disabled?

The answer is no. The initial population of grey agents will grow and saturate every available cell, but the color will never change. 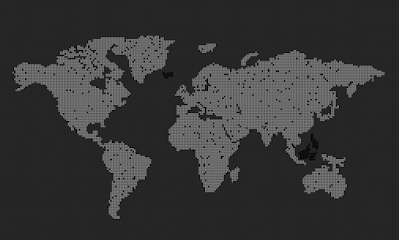 Can we see spontaneous speciation from a completely grey initial state when mutation is enabled?

The answer is yes. The initial population of grey agents with mutation leads to speciation. Sometimes the borders between species are quite distinct, sometimes more dispersed. I think a big contribution here is the ‘mutation frequency’ and also the ‘selection threshold’. Maybe if I set the latter to a smaller number, the borders would become more distinct. 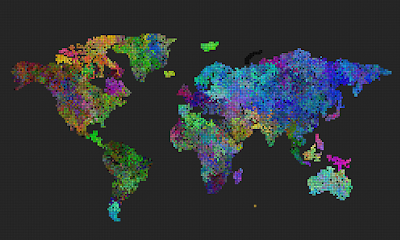 What helped to make the species grow larger and the borders more distinct was when I added the ‘mutation frequency’. I guess the population became slightly more stable. 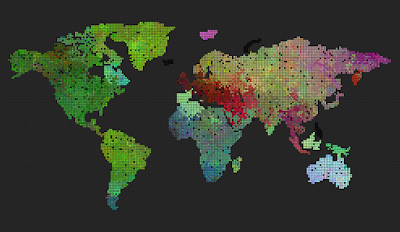 This is an idea I got while watching the previous experiment: Can we see spontaneous speciation from a completely grey initial state - with mutation?

The answer is yes. I think what happens is that higher mutation frequency emerges at some places and that area populates, but then slowly evolves to lower, or almost zero mutation frequency, in order to stabilize its population. 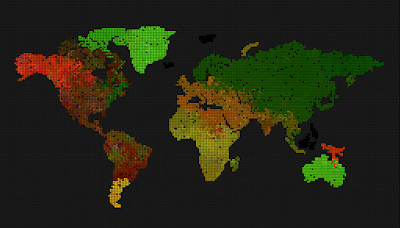 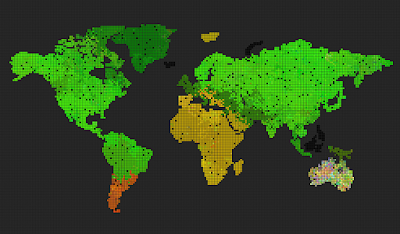 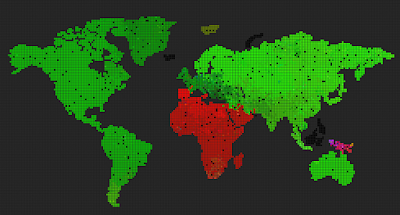 Remove the world map, so we get a uniform grid. Can we now observe different evolution, because the bottlenecks caused by having geographically separated continents and only some of them connected through a narrow bridge, was removed? 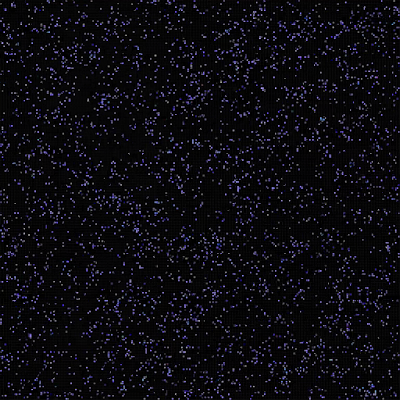 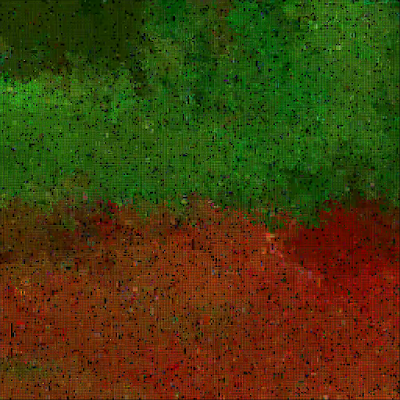 The result was surprising and cool :) The system evolved towards something resembling the “heat death” of the universe. 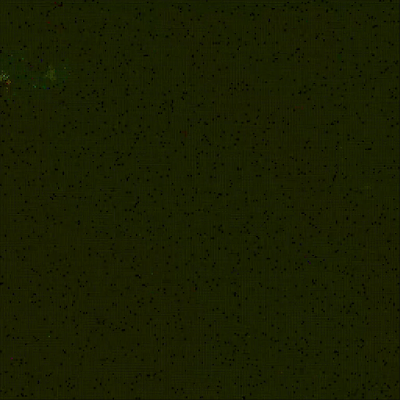 The above three pictures show the progression - the first one shows the start, the middle one shows speciations with blurry borders, and the last one shows a state where all genes drifted towards 0, 0, 0, and the system is now very unlikely to evolve into anything else, although, there are locations where genes mutate and try to survive for some time, the drive towards 0, 0, 0 is still stronger.

Another one surprise is that I was unable to replicate this “heath death” result. I kept it running for much longer, but never got to the heat death state. It just keeps oscillating between different dominant genes. 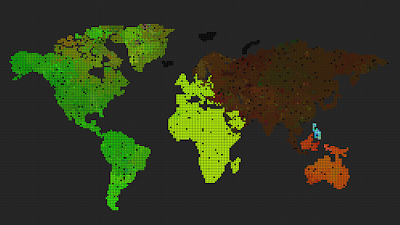 What happens when replication speed is limited so that no matter how good at finding a mate you are, you can have at most ~2.5 offsprings per mating pair in your life? E.g. track offspring and every time a pair has one kid, they each have a 20% chance of going sterile/dying. Tune background death rate so that you don't have the entire space filled up with solid colors. My guess is that with runaway sexual selection you might get some kind of coexistence here, but with no selectivity, it'll still go to brown/gray. 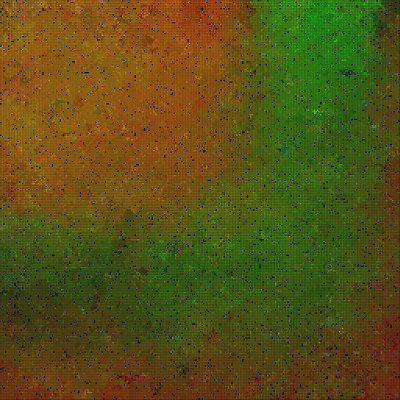 Starts with an initial phase where we observe speciation with blurry borders. Then it evolves to a regime where either R color dominates, or G color dominates. It oscillates between them as long as I let it run.

An additional question is why B color doesn’t dominate (used also as a mutation frequency).

Conclusion: the result doesn’t differ from other experiments where the max number of offsprings is not limited.

Sterility set to 100% after reproduction. Didn’t reach criticality in reproduction, the population soon died out

Initialize with R color only

Conclusion: no difference, mutation will create speciations, and then dominant color overtakes, and then it fluctuates 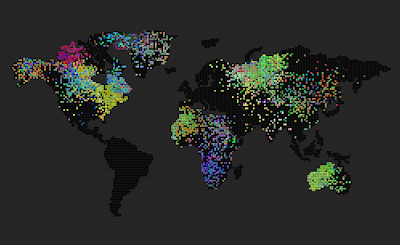 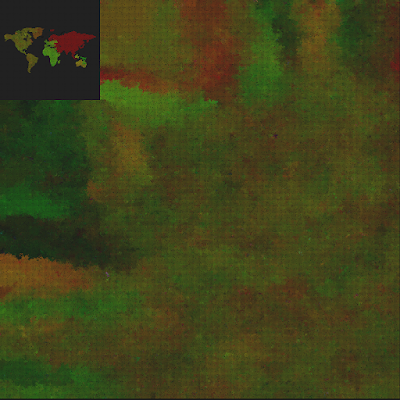 Comment: same as for 256 grid size, speciation to diffusion

Aged colored = gene is multiplied by a normalized age.

This results in visualization when young and old are clearly distinguishable. 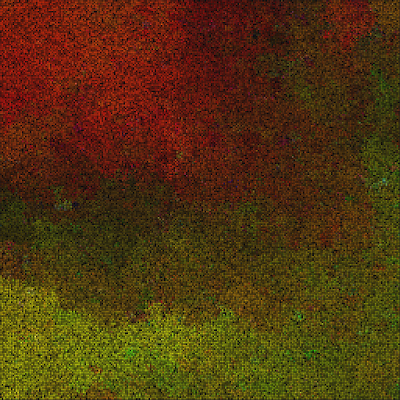 Offspring genome is not a result of averaging genes of both parents, but instead, we take some genes from each of them - kind of crossover point 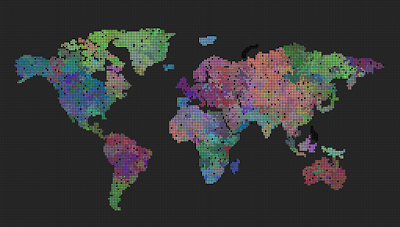 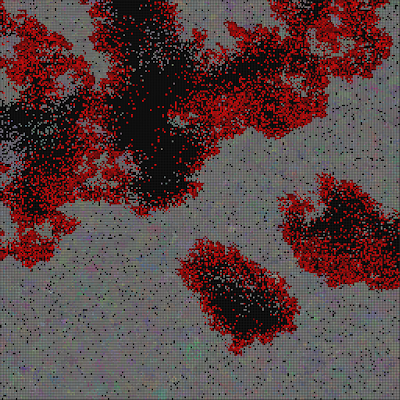 After I added the predators, prey stopped to speciate (no strong boundaries between species, they all are kind of grey-ish)

Now we can see that the speciation where predators are non-existent, however on islands and other similarly isolated areas without predators, speciation emerges. 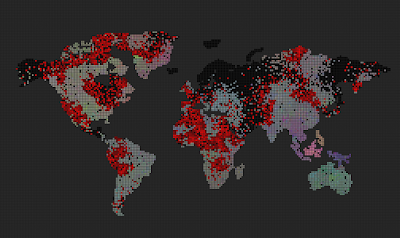 It’s fun to be doing my own experiments again! :-)

Implementing my own agent-based simulation of evolutionary dynamics of sexual selection gave me better intuition for my next step - memetic evolution. Stay tuned!