Another week of Miner Wars development is behind us. I bring you some insights into our progress.

Slobodan got a new camera, so we took a photo of the development gang. Only people available in Prague were shot - you can't see Dan, Nick and Ansel (they will be faked-in in an official version that's gonna be released shortly). 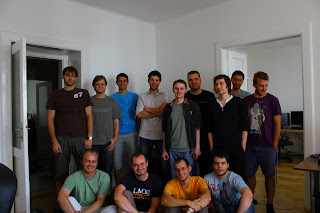 It has been a long time since we played Miner Wars on a really old hardware. We have one computer just for this purposes, an as old as hell - GeForce 6600 with only 128 MB video memory. I was extremely surprised to see Miner Wars running smoothly at 20-30 FPS. Not even on LOW settings, therefore executing GPU-expensive algorithms such as SSAO or our own (yet simple) post-processed anti-aliasing.

Our proprietary Image Space LOD (level of detail) is really a miracle! Guess who is the author!

In-game editor is shaping nicely, although still needs some touch-ups to make it mega-intuitive. For this purpose we are going to organize a series of "usability" test sessions - right here in the office. We will call random people (e.g. the president of the country, or that crazy guy dancing on the bus station who also claims to be the president), let them play with the editor, and observe how they are doing.

The physics engine has been almost completely rewritten. It's stable, even for objects at large positions (tens of thousands of meters from the point zero). It's multi-threaded - we use custom-made parallel tasks library. One of the features that still needs to be changed is the new way of 'head-shaking' and some of the 'head-acceleration-reaction' equations. 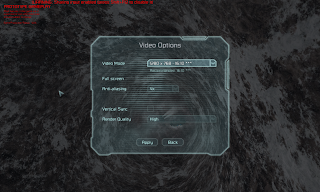 We had an interesting issue in the part of the engine holding the list of active objects (voxels, player ship, mother ships, AI). Someone made a mistake, and every object was loaded twice! We found it when we noticed that every object and its ghost version (which wasn't supposed to be there) were colliding -- we had hundreds of collisions per frame. Of course it's fixed now, but it did get us to implement one nice feature (added into developer screens that you can use in TEST build) - we can display every collision in the game HUD as a navigation point!

Actually there are so many cool options in debug/developer screen. Cracker's paradise!

I finally got to play Prototype (on PC). That game has such a perfect controls (occasionally there are some glitches, but who cares?). I really like all the jumping on skyscrapers, gliding, throwing trucks and people -- this is how gameplay and game mechanics make a great game.

The following week will be mainly about stabilizing base code and making sure that what's implemented is perfect and looking fantastic. The next big release is knocking on our doors!
Posted by Marek Rosa at 1:08 AM