Medieval history has countless examples of conflict and war. For this reason, combat has always been part of my plan for Medieval Engineers. In this update, we are creating combat mechanics to make fighting more intense and exciting for players. In the future, we will polish it even further with the introduction of more decals and enticing particle effects!

I want to start talking about the combat system by saying there are a few core ideas that are driving our design.

“Combat shouldn’t take away from engineering.”
This is the primary idea that is reinforced by all of the other ideas. I see engineering as the core of our gameplay because it’s what makes engineers games different from similar games.

“Combat should be easy to learn.”
There shouldn’t be new controls, purposefully difficult timings, or combination moves to make fighting harder than it has to be. You should understand it well enough after only a few minutes of practice.

“Combat should rely mostly on skill to win.”
Winning should always be possible if you are more skilled than your opponent.

“Combat should be short.”
You shouldn’t have to spend a lot of time on combat if you don’t want to.

The only advantages that you can bring into combat are better equipment and more health.

The combat system is still based on attacking and blocking but it is enhanced to provide a greater variety of attacks and blocks. There are three zones around each character that can be attacked and defended, which creates a directional approach to combat. There are two kinds of attack: standard and charged. Charged attacks are more powerful than standard ones but they are also slower because you have to spend time charging them. You can defend two of your zones at once using a shield. This makes defense easier, but shields take damage quickly and they can block your vision of the enemy... 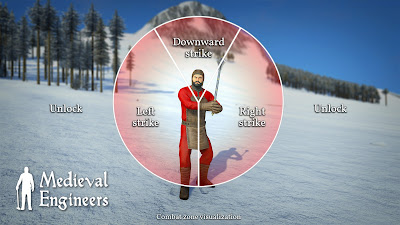 Combat makes use of the stats system introduced in our last update. Attacking or successfully blocking will use stamina similar to how it did before, but now there is an additional adrenaline effect. When you are fighting you will hear your heart beating and your vision will narrow. This is the adrenaline effect which makes your attacks and blocks faster than usual. If you build up more adrenaline than your enemy you will be faster, but it will fade quickly if there’s a break in the fight.

The part of combat that makes zones possible is target-locking. Since our goal was to keep the controls simple there is no button to lock onto a target. Equipping a weapon, attacking someone, or being attacked will cause you to go into a combat mode. In this combat mode you will be able to lock onto anyone you look at. This is a ‘soft lock’, meaning that you can break it easily by looking away or by moving out of range. While you are locked your character and camera will track the enemy and you will be able to aim attacks and blocks. You can also strafe to the left and the right and remain locked onto your target. 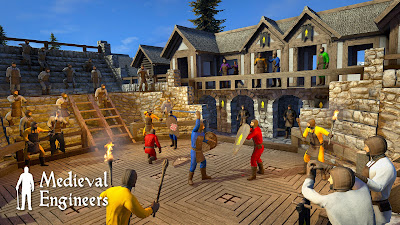 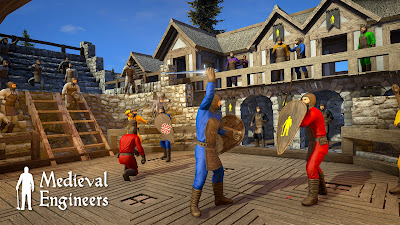 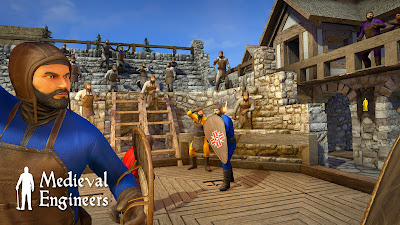 All of these combat changes touch on many other parts of the game, which we have been improving at the same time. Our barbarian AI had to be updated to use the combat system, so we took the opportunity to streamline the barbarian behavior. They now focus much more on players and less on attacking blocks. You will want to make sure that you protect your spawn points because the barbarians won’t give up.

Parts of the HUD are being updated to display the new combat reticle. I want the HUD to look good and be easy to read, so we are also updating the quest and chat displays with larger text and dark backgrounds to to make them easier to read. The chat is also being upgraded with a movable and resizable window, a scrollable history, and new channels for local, house, and private messages. 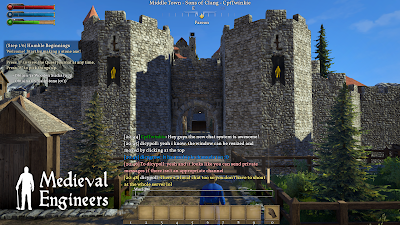 I’m always paying attention to how the game looks and feels, which is why I wanted new combat animations and sounds. While we were making them we had to develop some new options for our animation controller and some new ways to define how sounds are used. This gave us the foundation we need so that we can add environmental-based sounds and music. This means biome-specific background sounds and even combat music!

We are giving you additional features for server admins, things like a remote API to monitor your servers similar to the one in Space Engineers, chat logging and offline chat to keep up with players, and a message of the day to announce rules and events.  For modders we have updates to subparts, new definitions for biomes, and updated entity effects. The new chat channels are moddable and all of the new combat related features are available for use in your mods.

List of New Features:
For Modders:
For Server Admins:
Read the full list of new features at http://news.medievalengineers.com/update_0_6_4/patch_0
Purchase your copy

We welcome all feedback from our community and that’s why we have decided to launch a new support portal. This is where you can provide feedback and find support for all our games in one place. The portal should be a single destination for all your ideas, issues, and technical support needs. You can find it at: https://support.keenswh.com/ 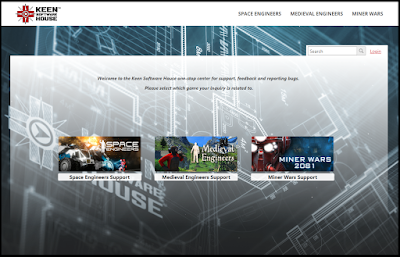 Medieval Engineers is still in development. Everything in the game is subject to change.

Personal bio:
Marek Rosa is the CEO and CTO of GoodAI, a general artificial intelligence company, and the CEO and founder of Keen Software House, an independent game development studio best known for their best-seller Space Engineers (2.5mil+ copies sold). Both companies are based in Prague, Czech Republic.

Marek has been interested in artificial intelligence since childhood. Marek started his career as a programmer but later transitioned to a leadership role. After the success of the Keen Software House titles, Marek was able to personally fund GoodAI, his new general AI research company building human-level artificial intelligence.

GoodAI started in January 2014 and has grown to an international team of 20 researchers. At this time, Marek is developing both Space Engineers and Medieval Engineers as well as daily research and development on recursive self-improvement based general AI architecture.
Posted by Marek Rosa at 7:19 PM