The next Major (1.199) release for Space Engineers is upon us. Heavy Industry Introduces a whole new vision of industry in Space Engineers! A reimagining of industrial might, from lunar mining site to factory floor; smelting, refining, and mass production never looked so good.

This massive update is one of our biggest! Including DLC, Heavy Industry adds nearly 100 new blocks and block variants to Space Engineers! We hope you enjoy exploring Heavy Industry as much as we did creating it. 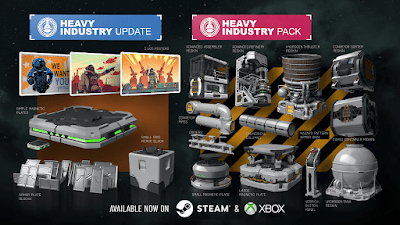 With this release, we are expanding the number of blocks, introducing new gameplay features, and expanding your creative tools!

You can find a complete list of all free game content below. We are also offering you the opportunity to support the continued development of Space Engineers by buying the Heavy Industry DLC, which includes even more thematic additions to Space Engineers!

Armor Panel Blocks - Sheath your cruiser in armor or frame out an interior, when space is at a premium. Introducing 16 shapes, heavy & light armor variants, small and large grid versions. Expand your creative options with 64 new blocks!

Scenario “Pertam Orbiter”- Positioned high above the scorching deserts of Pertam, this asteroid outpost is fully fitted for an excursion to the surface or exploration of the nearby asteroid field.

Take advantage of the provided manufacturing facilities or strike out! Investigate this tiny industrial complex and explore the nearly 100 new blocks and block variants included in the “Heavy Industry” update & DLC.

Why did we change it?

The default behavior for the parking brake meant that any time it was triggered ALL grids attached via connectors, or landing gear, or parked wheels, would toggle. This could cause unexpected behavior and often resulted in a great deal of clang.

This update improves this behavior by adding a toggle option to connectors, landing gear, and wheels that will allow you to ignore the Parking Brake functionality. Additionally, parking behavior has been streamlined and unified, allowing you to trigger parking actions on cockpits using timers, etc.

Why did we change it?

The default behavior for toggling power had the undesired effect of impacting all grids, subgrids, and connected (connector) grids. This made it very hard to control large or complex constructions and was especially problematic when landing at a charging station or base. Default behavior made the simple action of docking overly complex.

Several changes are being made to improve the behavior of the power toggle. Docking, subgrids, and alternative power supply configurations should now all operate in a much more intuitive manner.

A very special thank you to...

We want to thank everyone who made a submission to the Music Contest “Sounds of Space Engineers”. Included in the free portion of today's update, we have incorporated all of the winning contest tracks! Crank up the Jukebox and have a listen! Tracks are listed by title. You can find the artists, and a complete track list, in the game credits.

Similar to our previous major releases, we hope you will take this opportunity to support the continued development of Space Engineers. This DLC pack consists of cosmetic items that enrich your game visually. None of the features in this package provide any advantage to players who purchase this DLC. 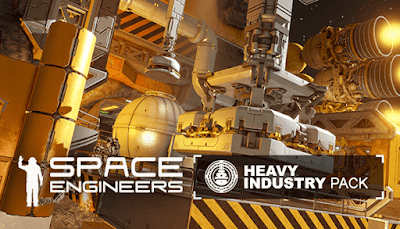 Beam Blocks
A collection of industrial-style beams for structural support and exterior decoration. The Industrial beam, 10 variants in both large and small grids.

Industrial Conveyor Pipes
A departure from the classic, angular conveyor design. The industrial conveyor pipe is provided in 7 variants for large grids which includes a new conveyor sorter.

Cylindrical Column
A new column offered in both small and large variants, designed to reinforce your starbase, starship, or underground fortress.

Large Cargo Container Reskin
A new, rugged, industrial-style cargo container for all of your shipping and storage needs.

Industrial Refinery
A new, highly accessible version of the refinery.

Industrial Assembler
A new, highly accessible version of the assembler.

Hazard Pattern Armor Skin
Beware, Danger, Caution. A hazard skin for all of your industrial creations.

We plan to continue with the development of Space Engineers for both PC and Xbox platforms, so I’m sure there is a lot you can look forward to.

Q: Should we now expect that we will get a new DLC every three months?
A: Free and paid content releases support the continued development of Space Engineers, as well as bringing new things to the game. All paid DLCs are not pay-to-win, but rather cosmetic. We think this is the right way to bring interesting content to the game and keep the game improving. We bring a lot of free content to all players. This content is usually highly requested by our community.