I’ll try to keep today’s blog short. My team and I would like to celebrate the Holidays with all of you, our players, whether you celebrate Christmas, Hanukkah, Kwanza or any other holiday during this festive season. Christmas is the biggest holiday for the Keen Software House Team and we usually give a lot of presents to our families and friends during this holiday. We also spend time with our loved ones and it’s a time when we slow down after another fantastic year of working on Space Engineers!

The reason why I’m writing this is very simple. Looking back at the Space Engineers in 2019, the year was very successful and very busy and there were a lot of changes and new things for the game.

We released Space Engineers out of Early Access at the end of February, but it was not the end. We did not stop moving forward.

In April, we came with the first DLC - Decorative Pack which was received very well by our community. I think I won’t exaggerate if I say that we were surprised by your reactions and the very positive feedback we received from you.

We decided to continue with releasing optional DLCs (designed to not split the Space Engineers playerbase), which always include a free update and paid cosmetics.
We went live with the second DLC - Style Pack - at the beginning of June and then with the third one - Economy - in August.

We wrapped up the 2019 DLCs with Decorative Pack II, which went live on the sixth anniversary of Space Engineers in October.

And again, we did not stop here. We decided to share the details about where we are with the Space Engineers Xbox One port by running the live stream gameplay session on November 28th. With our special guests, Cosmic Chimp, Captain Jack and Dr Craz, we streamed three hours of  Space Engineers gameplay on three Xbox Ones, having fun and answering questions from those members of our community who are excited to play Space Engineers on Microsoft’s console.


What is special about today?


Today’s release is a special one, because we are bringing you a number of “presents”. The first one, the Small Window Blocks have been requested by many players, so we decided to add them to the game. There are 20 small window block variations in total, so I’m sure you’ll unleash your creativity even more now.

Another one is the Large Open Cockpit, which has also been super popular with our community. This cockpit is an addition to already existing seats, but again, we listened to our community and we decided to give it to you as a Christmas present.


Finally, we are adding additional catwalk variants into the Deco Pack 2 DLC so they look good in even more situations. This upgrade is free for everyone who already owns the Deco Pack 2.

We are also releasing several improvements with this release; all of the details can be found in the change log.

With Christmas just around the corner, I am very happy to share great news about the Space Engineers comic, which was written by Jesse Baule. We have received a final version of the artwork from Mike Hamlett and I’m thrilled that we have the very first Space Engineers digital comic book coming out today!

Discover the story of Doctor Petra Halas and her intern Reginald Simmons, which brings you to a top-secret research facility where strange things are happening.
You can download the Space Engineers comic here. 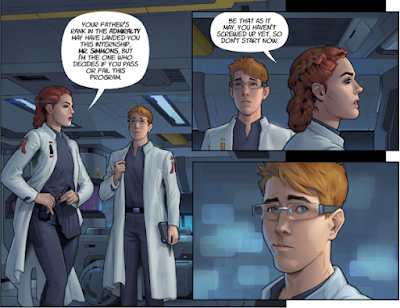 If you liked some of the character skins (Miner suit), safe zone skins (Voronoi) and faction logos featured in the comic, you can purchase the Economy Deluxe and enjoy these cosmetic items while playing Space Engineers.

All players who own the Deluxe version of Space Engineers will get access to the comic book concept art as part of the free addition to the Deluxe package.

Please let us know if you liked the story, as well as the art featured in this comic and if you would like to see more Space Engineers comics in the future.

A festive skybox moon for the holidays 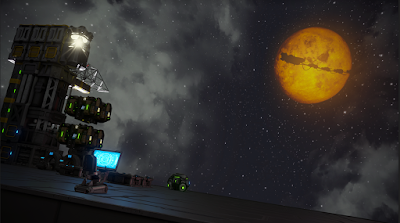 From December 19 until January 2nd, there will be the legendary red ship (Santa and his reindeer are too busy delivering presents) being pulled by a faithful team of drones, which will be visible in the Space Engineers skybox in-game and help us all to remember to celebrate the holidays with our loved ones.

Thank you and happy holidays!

Thank you for being such an awesome community! My team and I wanted to release this update for free, with no paid DLC attached to it, as a way to thank you for all your support.

I hope you’ll enjoy this update and that you’ll have a great time playing Space Engineers during the holiday season.

At this time, Marek is developing both Space Engineers and Medieval Engineers, as well as daily research and development on recursive self-improvement based general AI architecture.
Posted by Marek Rosa at 7:18 PM